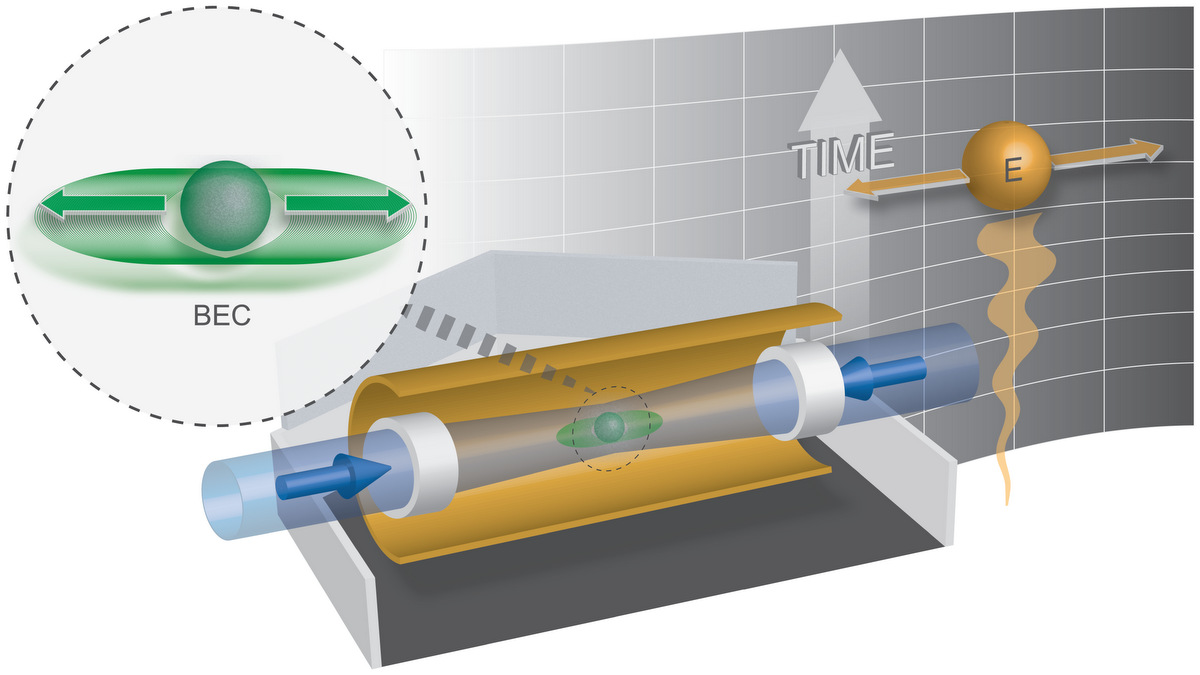 S. Kelly of the JQI did a very nice writeup with awesome artwork for Lindsay’s Zitterbewegung paper as follows:

In “Harry Potter and the Sorcerer’s Stone” (JK Rowling, 1997), Harry, Ron, and Hermione encounter a massive stone chessboard, one of many obstacles in their path. To advance, they must play, and win. Although the board and pieces are much larger than normal, and the circumstances a bit peculiar, one thing remains clear to them—this is a game of chess, with the same rules as always.

Just as Rowling created a fantastical chessboard for her heroes, scientists too can change the size and shape of the board and pieces: if the game plays out by the same rules, there is no fundamental difference. This approach is the basis of quantum simulation. To gain insight into inaccessible phenomena, researchers simulate elusive quantum systems with laboratory controllable ones that share the same mathematical form as the original physical system. Recently, a JQI group used this technique to simulate the motion of a free electron, known as zitterbewegung, by assembling an analogue system of neutral atoms in a Bose-Einstein condensate.

Concisely referred to as “zitter” (and often times by the even more abbreviated “ZBW”), zitterbewegung is an ultra-fast trembling motion expected for electrons (and other fermions) moving near the speed of light. This peculiar ­­­motion is predicted by the Dirac equation, which describes relativistic motion (think Einstein—special relativity) in the framework of quantum mechanics.

One of the great paradoxes of modern physics is that our description of the universe has two sets of rules, general relativity for the very large and quantum mechanics for the very small. While this works in practice, it doesn’t offer a very satisfying picture of reality—after all, the universe certainly seems consistent across all scales. Though there is a well-established link between special relativity and quantum mechanics (in the form of the Dirac equation), it is not yet understood how to reconcile the probabilistic framework of quantum mechanics with the classical mechanics of general relativity. Examining where relativistic effects mingle with quantum ones, as with zitterbewegung, may offer deep insight into a unified picture.

Unfortunately, zitterbewegung is particularly unsuitable for laboratory study: this quiver takes place a sextillion times every second, a truly staggering frequency (one sextillion = one thousand billion billion!) and far too fast to have any hope of observing directly. To investigate zitter, researchers must swap out the relativistic electron for something that oscillates more sedately.

The JQI team began by trapping rubidium atoms and cooling them to form a Bose-Einstein condensate (BEC). Inside the trap, the cloud of atoms can exist in stable, static states. By shining laser light on the cloud, researchers place the BEC in a quantum mechanical mixture of these states, in this case a “superposition” of one spin state moving with a positive momentum and a second spin state moving with an equal and opposite momentum. When these lasers were turned off, the cloud sloshed back and forth, oscillating at a few thousand Hz—for comparison, a pesky no-see-um (midge fly) flaps its wings about a thousand times per second, a thousand Hz—and this relatively slow pace allowed researchers to essentially photograph the BEC as it traversed the trap.

In the language of atomic physics, this movement between states is a Rabi oscillation, a consequence of initially placing a system in two states at once. Analogously, zitterbewegung occurs for a relativistic electron because it is in mixture of states, oscillating between them. In fact, the electron can be described as quivering due to interference between particle and antiparticle states—matter and antimatter!

Always direct, Richard Feynman ended his 1981 proposal for quantum computers by exclaiming “nature isn’t classical, dammit, and if you want to make a simulation of nature, you’d better make it quantum mechanical[!]”. He anticipated a ‘universal’ quantum simulator, perhaps made of “little latticeworks of spins and other things,” that, if tweaked right, could imitate any quantum system.

By using ultracold atoms, the research team could directly observe the trembling. While the time scales were significantly slower than electrons, the particle motion is real, and not simulated. Specifically, in previous works that use ions and photons, the Dirac particles were not represented by the actual system particles themselves. But, as always, mathematics is our language for describing the universe, and if two systems are equivalent mathematically, they can display the same physical phenomena. Regardless of the approach taken, as quantum simulators are refined, more and more of the weird, exotic stuff of the universe will be accessible to study.

This story was written by S. Kelley, JQI.